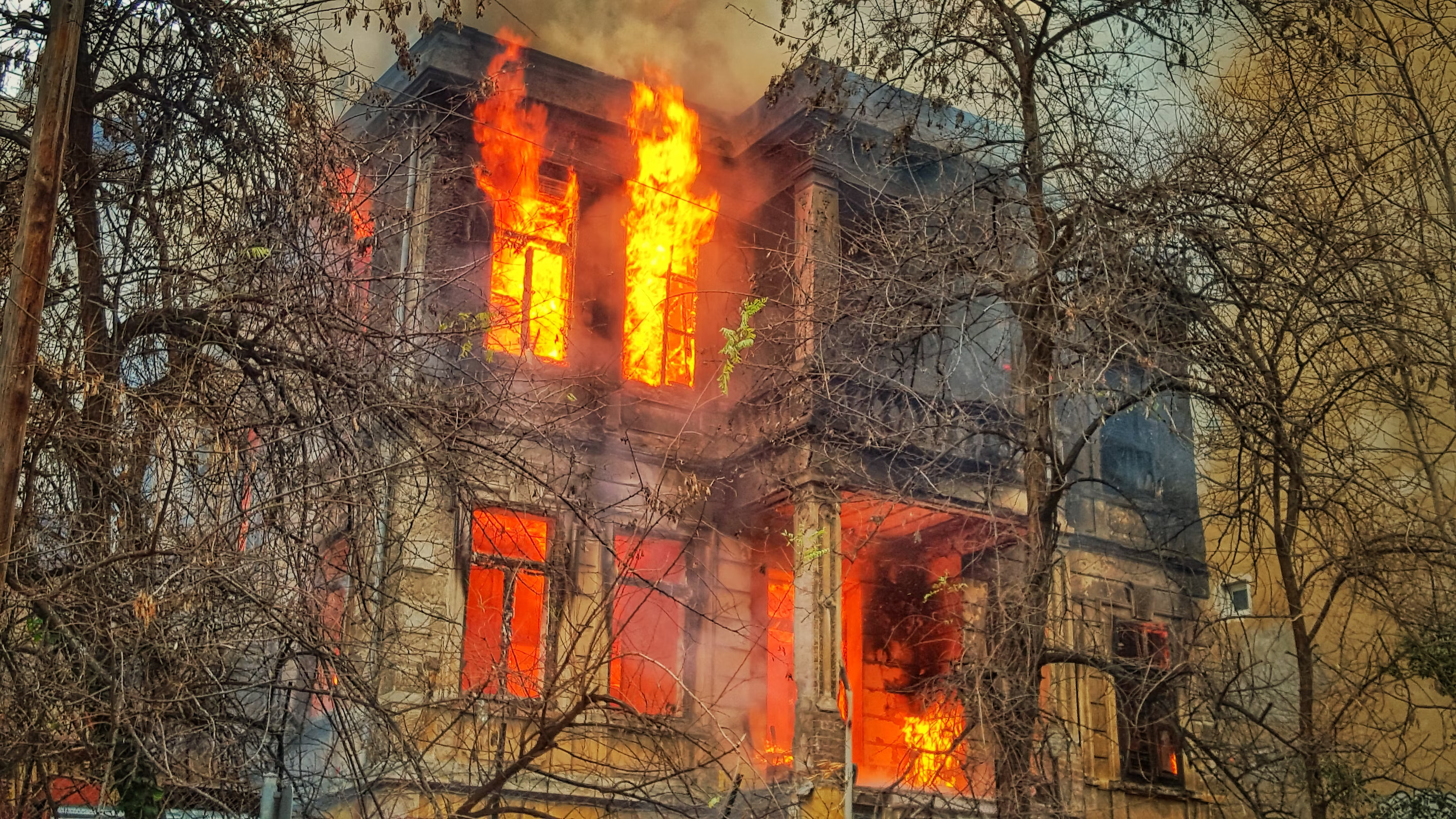 According to the National Fire Protection Association (NFPA), house fires occur more often than most people think. Every 24 seconds, a fire department responds to a fire somewhere in the United States.

1. Every 24 seconds, a fire department responds to a fire somewhere in the United States.

3. Of these reported fires, 490,000 involved structures such as households and apartments.

6. On average, seven people die from home fires per day in the United States each year — three of them children.

8. Cooking equipment is the leading cause of home fire injuries, accounting for 43% of injuries related to house fires.

10. Electrical malfunction or failure is another common cause of house fires, responsible for 13% of reported non-confined structure fires in 2018 alone.

11. Heating equipment was the second leading cause of house fire fatalities with an estimated 630 people dying from this type of fire in 2018.

12. In the same year, portable and stationary space heaters caused an estimated 14% of all home fire fatalities or 85 civilian deaths due to house fires.

13. Clothes dryers were responsible for an estimated 15,970 structure fires in 2018 – some of which resulted in death and property damage.

14. One out of every three home fire deaths is caused by a smoke alarm that did not work or had no batteries installed at the time of the fire incident.

15. An estimated 3,000 people are injured each year from attempting to fight fires on their own instead of leaving it to trained professionals.

16. Three-quarters (76%) of all fatal residential structure fires occurred in homes with no working smoke alarms installed.

17. Close to one-third (30%) of residential structure fires are caused by carelessness or negligence, such as leaving a stove on unattended for too long.

19. Fires originating in the kitchen accounted for an estimated 327 civilian deaths between 2017 and 2018.

20. Candles were responsible for more than 10% of reported house fire deaths over that same period, with an average of 50 people dying every year from candle fires.

22. Of these reported fires, 15,600 were classified as “overall intentional” or arson-related incidents.

23. Electrical malfunctions and failure remain a leading cause of house fires in 2019 – accounting for 17% of structure fires reported that same year.

24. Heating equipment was again the second leading cause of house fire fatalities with an estimated 500 people dying from this type of fire in 2019.

25. Wildfires caused by deforestation, climate change, and careless behavior remain one of the leading causes of home destruction in areas near forests and other combustible landscapes across the United States each year.

How Many House Fires Are There Per Year?

How Common Are House Fires?

It’s important to note how common house fires can be because they are the third leading cause of unintentional deaths worldwide. Further stats from NFPA reveal how certain types of house fires are particularly concerning:

Taking steps like replacing old electrical wiring, installing smoke detectors, and making sure not to leave open flames unattended can help minimize the risk of a house fire. It’s also important for homeowners to stay educated on how common certain causes are and how to prevent them from occurring in order to keep their homes safe and secure.

What Causes A House Fire?

According to the U.S. Fire Administration, national Fire Protection Association, FEMA, and Ready.gov, the top causes of house fires are:

Most commonly, a house fire is caused by negligence or an accident. Electrical malfunctions and unattended candles are two of the leading causes, but faulty heating equipment and cooking accidents can also lead to devastating outcomes. If not properly maintained, any one of these can cause a spark that turns into a flame in minutes.

To prevent house fires, it’s important to be aware of how common they are and how quickly they can occur. By taking the necessary steps such as installing smoke detectors, keeping an eye on candle flames, and replacing old wiring, homeowners can significantly reduce the likelihood of a fire in their home.  With knowledge comes power – so stay informed when it comes to house fire statistics!

Being aware of how common house fires are should encourage homeowners to take actionable steps to mitigate their risk. Here are some basic tips anyone can follow:

1. Install smoke detectors and carbon monoxide detectors throughout your house, especially near bedrooms and on each level of the home. Make sure to test them regularly and replace the batteries as needed.

3. Keep a fire extinguisher in an easy-to-reach area and check it every six months for expiration date as well as malfunctioning parts.

4. Keep combustible materials away from any hot surfaces, such as space heaters or stoves. Be aware that some items, such as aerosol cans should never be heated up at all – even if it seems to be safe.

5. Have your home’s electrical system inspected periodically by a professional and make sure outlets are covered with safety covers if there are small children in the house. Don’t overload outlets, cords or appliances.

6. Put out any smoking materials completely before discarding them, always double check that they are extinguished.

7. Store flammable liquids away from heat sources or potential ignition points; such as pilot lights on furnaces or water heaters – and only use approved containers for storage of these liquids.

8. Clean dryer vents regularly to remove lint build up which can increase the risk of fire due to overheated machines or dryer fires.

9. Don’t leave cooking unattended on the stove, be sure to turn off burners when not in use and keep pot holders and other flammable objects away from hot surfaces.

10. Have a fire escape plan for your family in case of an emergency so you can exit the house quickly and safely.

Following these simple tips will help ensure that your home is safe from potential fires and that you and your family are prepared should one occur. It's important to take all necessary precautions to protect your home and loved ones!

What percentage of fire deaths occur at home?

According to the NFPA, 79% of fire deaths and 73% of all reported fire injuries were caused by home fires.

How common are house fires?

A home fire occurs every 87 seconds.

How many house fires occur every year in the United States?

Around 358,500 house fires occur each year in the United States.

How many house fires are caused by fireplaces?

21,510 of all house fires are caused by chimney fires.

Yes, homeowners insurance covers almost every cause of house fires, including:

Homeowners insurance can pay to rebuild your home and replace any damaged belongings if your house was damaged or destroyed by a fire. Your insurance policy can also pay for temporary lodging, restaurant meals, and other living expenses you'll have while your home is being repaired or rebuilt.

Overall, house fires remain a serious problem in the United States, costing thousands of lives and billions of dollars in property damage every year.

It is important to take proper safety precautions such as properly installing smoke alarms, using fire extinguishers and carefully handling heat-producing equipment to reduce the number of house fires each year.

Additionally, all households should have an escape plan in case of a house fire to ensure all family members are able to safely evacuate. The statistics above make it clear how dangerous and costly house fires can be, so everyone needs to do their part in preventing them.

89 Insurance Statistics You Should Know (Industry)

How Many Americans Are Uninsured? Health Insurance Statistics

69+ Homeowners vs. Renters Statistics: How Many Americans Rent?

Did you know that 36% of American households currently rent their home?